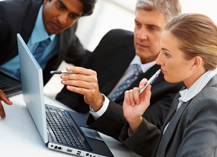 A company established abroad may temporarily detach employees for an assignment with another company located in France.
For any activity, the company is obliged to appoint a legal representative in France.
We propose to accompany you for the management of your posted workers.
Our staff speak French, Italian, English, Spanish, German, Polish and are at your service to inform and advise you about the transnational prior declaration of posting, which must be sent in French to the labor inspectorate , the creation of the SIPSI account, Or formalities such as Form A1 (on social security expatriates or non-resident employee).

activities concerned by the detached work

Activities giving entitlement to secondment of employee are the following :

• service prestation : industrial, commercial, artisanal, liberal or agricultural activity.
• Intragroup Mobility : provision of personnel between companies of the same group for a mission or training
• Providing interim : a temporary employment company can second employees to a company in France for one-off assignments
• Operation for his own account (self-service): a company established abroad , can temporarily detach its employees in France for one-off missions
• land-based transport activities are affected by the secondment rules . However, some specific measures are applied to this sector (attestation mandatory detachment).

An online service to enable companies to manage their seconded staff in the European Union.

E-detachement represents you in the European Union.

I discover the service online

Need for assistance for your secondments of workers.